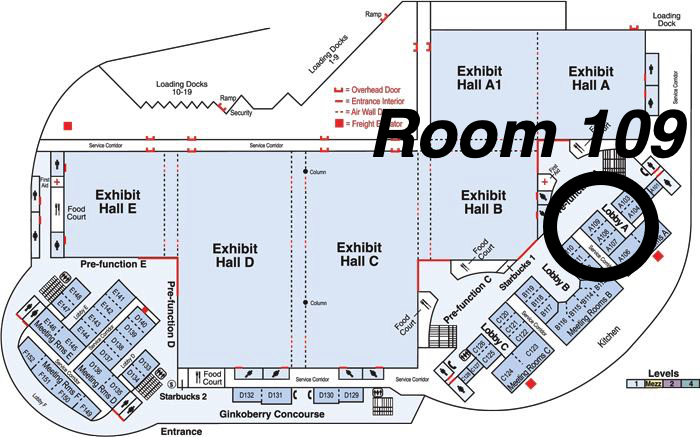 Tuesday’s the big day! We’re having a short rally at 4:00 at the Oregon Convention Center before lining up to sign the testimony sheet which ODOT will put out at 4:30. We’re still putting together our last-minute plans for the event – be sure to check out our facebook event page/twitter for all the latest information. We understand it’s a work day, and we hope you’ll join us whenever you can! ODOT is removing the sign-up sheet at 6:00pm, so if you plan to testify you need to be at the hearing before then. We’ll have fliers, stickers, new buttons, magnets, copies of Sarah Mirk’s new zine about us, information on how to testify, and posters to distribute. The legendary Paul Rippey is rumored to be making an appearance!

If you can’t make the event, we’ll post the link to a livestream video of the hearing on social media if ODOT provides one.

Thanks to all who came to Wonk Night! 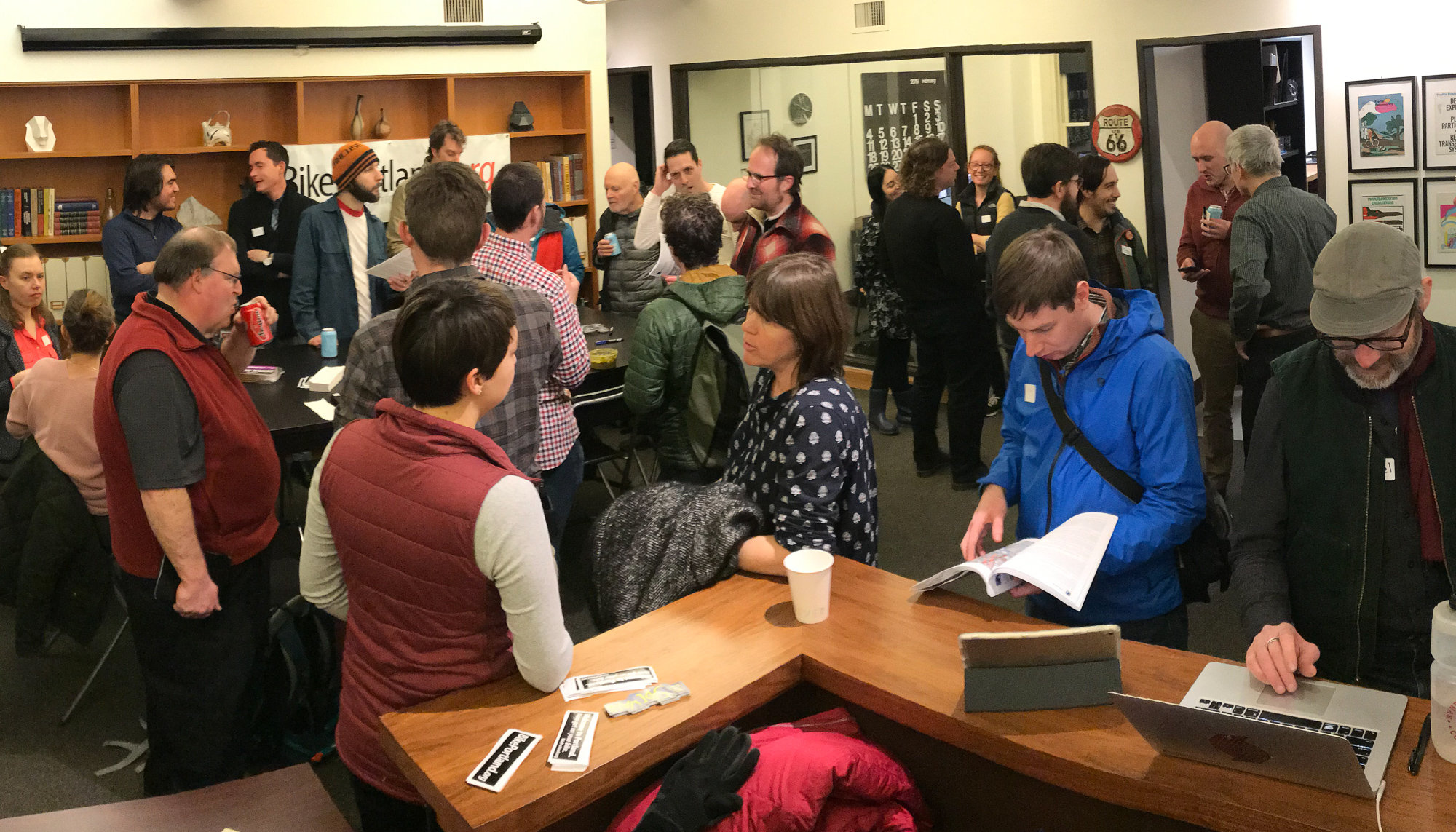 Thanks to BikePortland, The Street Trust, Lancaster Engineering for hosting the “Wonk Night” last week, and thanks to the dozens of individuals who attended! We’re thrilled to see so many people showing up to dig into the technical details of the Environmental Assessment document that ODOT has provided and point out some of the critical flaws about the proposed designs. Check BikePortland.org for a recap of the findings from the community review of the document. 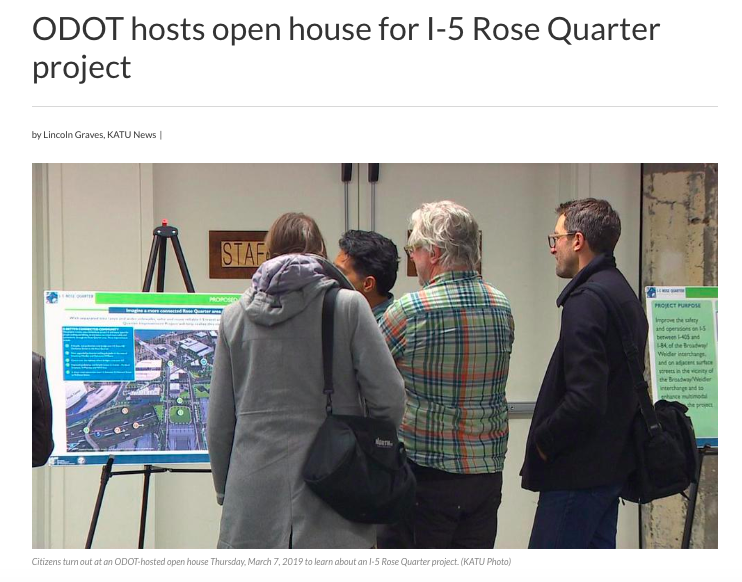 Thanks to all the community members who turned out for ODOT’s Open House! Our campaign got a little time to make our case on KATU, with reporter Lincoln Graves noting “we couldn’t find anyone in attendance willing to speak on the record in support of the project.” We’re a little bummed to see that the news station somehow managed to spend two minutes talking about a freeway widening and not mention climate change once in the entire news brief, but hey, we’ll do our best to hammer the issue home at the public hearing on Tuesday.

No response from ODOT:
Where’s the data? 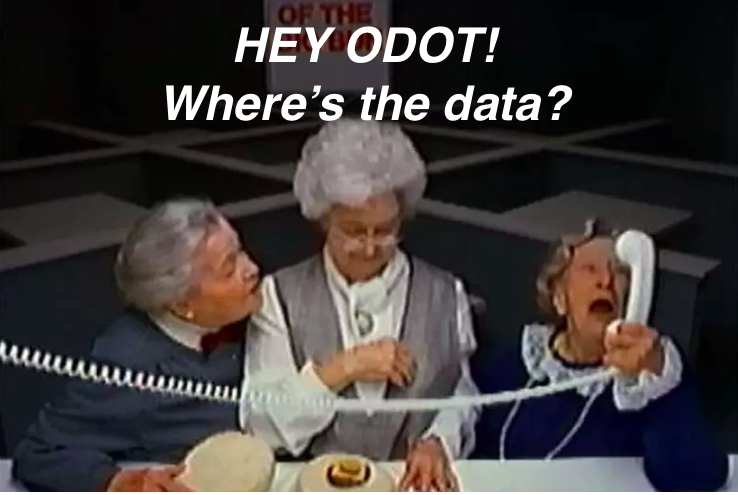 Last Monday, we sent a letter to ODOT asking for access to numerous data sets that were not included in the Environmental Assessment. The main document that ODOT is using to base their traffic projections (and therefore, the assessments on how this project would impact carbon emissions and air pollution) is missing *numerous* data sets, figures, appendices and riddled with inconsistencies. We are currently 22 days into a 45 day public comment period, and community members have not been given any opportunity to meaningfully independently assess ODOT’s (very dubious) claims.  Meanwhile, while the Environmental Assessment is missing all those facts and figures, Joe Cortright at City Observatory wrote at length about what *is* in the document:“When it comes to the proposed half billion dollar I-5 Rose Quarter Freeway widening project, the Environmental Assessment is less of an honest and objective disclosure, and much more a carefully edited and thinly veiled sales brochure.  The hucksterism starts with the name of the project, proceeds through its “communication plan,” and is executed in technical documents that have been carefully edited to remove the most salient information.”

We can’t emphasize enough: we need you to submit your written opposition to this project on the record before April 1st. We’ve got a full guide on our website about what to write and what sort of testimony is most helpful – share it with your friends, colleagues, roommates, and anyone else who cares about the future of our community. Our favorite so far includes this written description submitted at Thursday’s Open House: 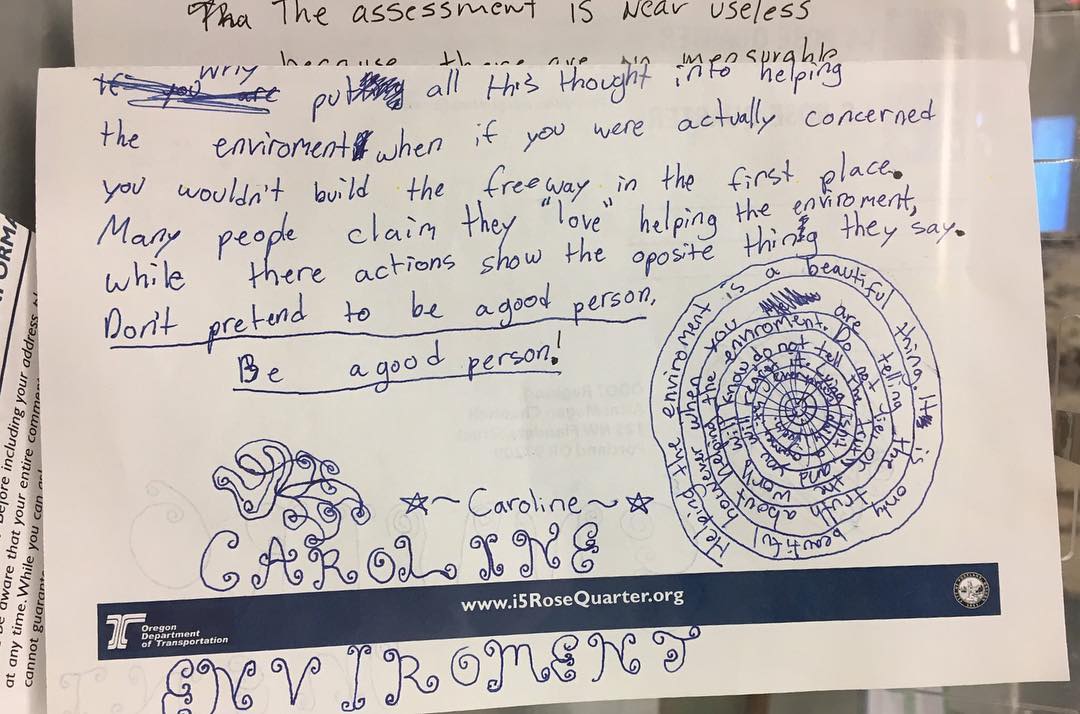 His takeaway: “What the freeway expansion clearly does…is repeat the historical injustice done by freeway construction in the first place: subsidizing travel for higher-income persons who live outside the neighborhood, while doing essentially nothing to better meet the needs of lower-income persons who live in and near the project’s location.”
– Willamette Week covered Joe Cortright’s research showing the massive demographic discrepancies between who drives on the freeway and who breathes the polluted air nearby.
A plan to widen Interstate 5 in the Rose Quarter could produce thousands more tons of greenhouse gas emissions a year, according to a local think tank. If enacted, the Oregon Department of Transportation (ODOT) Rose Quarter Improvement Plan will add two additional lanes to I-5 in the Rose Quarter area, equaling about 1.6 miles of new freeway lanes. According to analysis by Portland city planning think tank City Observatory, that could lead to 17.5 million additional vehicle miles—that is, the amount of miles driven by cars in a particular area—each year.
– Published in the Portland Mercurylast week.
“There’s not a single city anywhere in North America that has ever solved traffic congestion through freeway expansion.”
– Aaron Brown, on KATU News on March 7thSightline Institute updated and republished their FAQs about the project.“After sitting in traffic for over an hour on my way back to Portland from my job substitute teaching in Hillsboro, I’m almost tempted to believe Oregon Department of Transportation’s plan to invest $450 million in a 1.8-mile lane highway expansion sounds like a good idea. Luckily, I spent the day teaching students about the importance of research and data and how our notions of common sense are not always rooted in reality. Highway expansion, it turns out, is one of those instances.”
– A fantastic letter to the editor published in The Oregonianfrom Susie Kassouf in Southeast PortlandWe were on XRAY in the Morning on Thursday, March 7th, and we’ll be on the Heather McCoy show on KBOO at 10am on March 14th (apologies for those who tuned in last week – KBOO double-booked themselves!).

We celebrate #InternationalWomensDay by highlighting the work of Connie McCready and Marjie Lundell, who successfully fought freeway expansion in Northwest Portland in the 1970s, published in BikePortland in 2016. 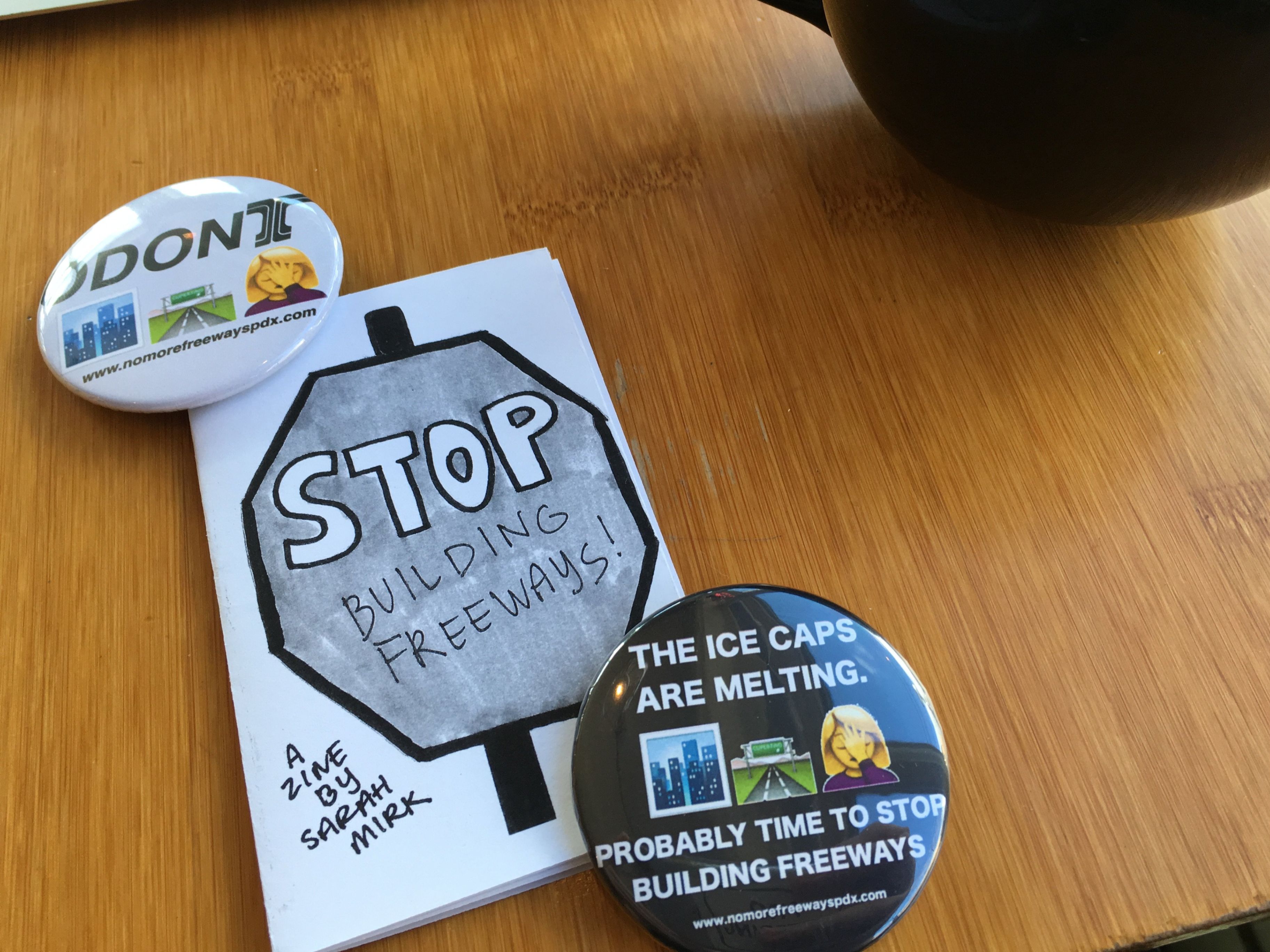 The public comment period closes April 1. That’s three weeks from today! That’s all the time we have left to get comments from every community members, letters from nonprofit advocacy organizations, statements from elected officials, academic documents highlighting air quality/climate/transportation research, and technical analysis of ODOT’s dubious claims into the. Every dollar you donate from here on out helps us put out posters, promote our campaign online, and solicit every possible word we can get on the record.

We’re excited for this public comment period to end and for the chance to mail y’all all the buttons, magnets, and copies of Sarah Mirk’s zine on our campaign that you could possibly want.

Thanks for your help on this final push!