We ain’t done yet, but this Tuesday’s hearing felt like an important moment for our campaign. We’re going to need your help through the final two weeks, but let’s just acknowledge: we took over that meeting. Sincere gratitude to you all – what an excellent accomplishment representing all that we’ve worked on for over 18 months of organizing. 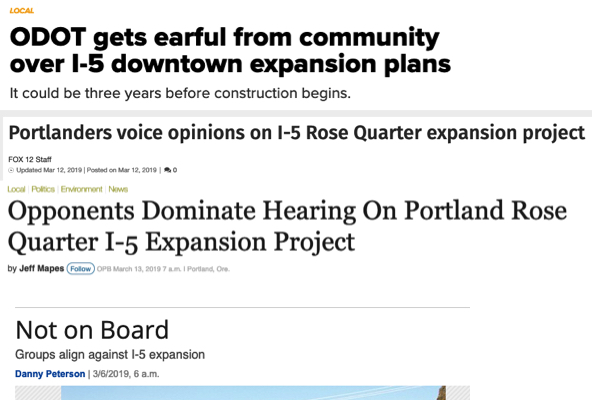 “If we have any backbone,” said Katy Wolf, chair of the Boise Neighborhood Association, “we should be telling ODOT to be putting a hard pause on [the project] while we wait for congestion pricing to take effect.”

Bryan Chu, an eighth-grade language arts teacher at Tubman Middle School, said it’s unclear if the school would be shuttered during construction or what the project might mean for the majority students of color who attend it. Chu said he can only assume there is no plan for Tubman. “We have always been made to pay the price for Portland’s progress,” he said, before adding, “Black lives matter, black students matter, black schools matter, black lung matters.” 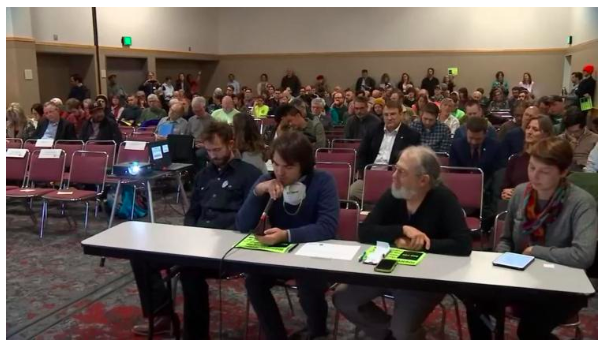 “Student Sadie Herout said, “It’s not just going to be affecting me, it’s going to be affecting a lot of people.” Manson and Herout – students at Harriet Tubman Middle School – are now concerned about an ODOT project so close by. “The air quality is very bad at our school. To add more trucks and automobiles would increase toxic particulates in the air,” said Herout.”

“At least a hundred concerned citizens gathered at the Oregon Convention Center on Tuesday evening to give the Oregon Department of Transportation their opinions on expanding Interstate five through the Rose Quarter.

“Freeway expansion is climate denialism. Forty percent of Oregon’s carbon emission comes from transportation, and spending half a billion dollars on new freeway when we have 11 years to solve climate change is intergenerational theft,” Aaron Brown with No More Freeways Coalition said.”

“Iannarone also lamented how it seems we, as Portlanders, have “Lost our way” when it comes to leadership on transportation. Then, like many other people throughout the night, she appealed directly to Commissioner Eudaly. “I know that you have courage. I know you have vision. We will have your back if you stand with us on this.” “And to ODOT,” Iannarone concluded, “It’s just not going to happen. We’ll lie down on that highway before you ever build this.””

“That opposition had a big presence at Tuesday’s three-hour meeting—the only hearing that will be held during ODOT’s public comment period, which ends April 1. People largely framed their opposition through a moral lens, insisting that investing in freeway expansion could contribute to global warming and negatively impact the surrounding neighborhood…

The choice, from Brown’s view, is clear—on both a logistical and moral level. “We’re out of time,” he said. “I understand there are political realities; there are also physical realities. There is only so much carbon we can put into our atmosphere.”

(…and while we’re at it, three other great links from this week!)

“A wider freeway will induce more traffic and pollution (and ironically, worsen traffic congestion), runs directly counter to the city and state’s goals of reducing greenhouse gas emissions, does nothing to improve safety, especially for those walking or biking, and disproportionately benefits higher income commuters from outside the city, while imposing social and environmental costs primarily on lower income households and people of color,” Cortright wrote on his City Observatory blog.“ 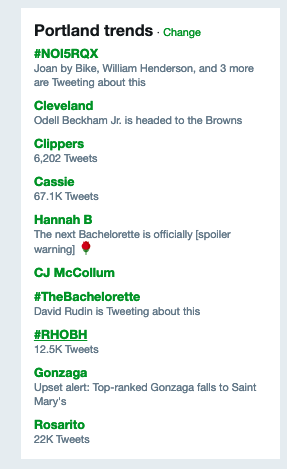 “Hardesty said she opposes the plan to spend around $500 million improving the area where Interstate 5 and Interstate 84 merge in the Rose Quarter. She believes the money would be better spent on alternative transportation projects, including bike and pedestrian paths.”

Hardesty charts ambitious course: ‘I’ve been very busy’ – Portland Tribune
“Myself and other parents from Tubman–especially the other members’ parents of the PTSA–we definitely think it’s a bad idea for them to expand a freeway, pretty much behind or close to the school Tubman. I definitely believe that the air quality wouldn’t be good for our kids as we’re already experiencing bad air there,” Tadimika Edwards, president of the Tubman Middle School Parent Teacher Student Association

Not On Board: Groups align against I-5 expansion – Portland Observer

#NOI5RQX
The hashtag for our event (thanks, Sarah Iannarone, for coining it!) trended on twitter during the public hearing. 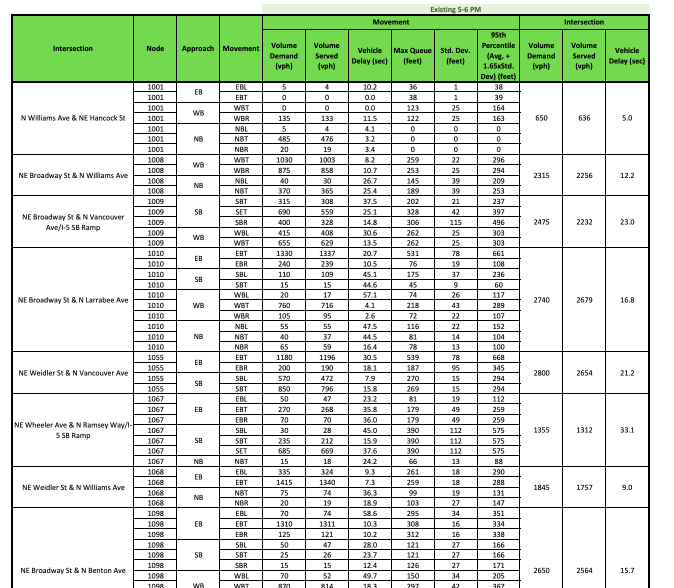 26 days after ODOT released their incomplete version of the Environmental Assessment, and after sustained pressure from our organization, the agency finally released the numerous technical charts and data sets that should have been included in the EA in the first place. Despite the 100 pages of flowery images and greened-up renderings, the EA released in February was missing the actual quantitative data that demonstrates ODOT’s ability to accurately assess the impact this project would have on traffic congestion, carbon emissions or air pollution.

Our coalition is eagerly looking through the data sets and determining if we have all of the data necessary to complete our independent analysis, and will conduct what analysis we can in the 18 days remaining in the Public Comment period. Stay tuned.

Our favorite comment submitted this week comes from Microcosm Publishing, a small business in the Eliot Neighborhood near the Freeway Expansion:I am a retail business owner in the Eliot neighborhood with an on-site staff of 12, at least eight of whom at any given time commute daily by bicycle, transit, and walking across the area affected by the proposed I-5 expansion project. Of these, several also suffer from severe asthma. Part of our business is open to the public, and the majority of our customers arrive without cars. We all suffer the deleterious effects of proximity to I-5.The impact of the proposed Rose Quarter project, including both the construction and the existence of the finished project will result in decreased transportation options and an increase in traffic as well as air and noise pollution that is all already well above tolerable levels.

Want to submit your own comment? We need you on the record!
Check out our website where we’ve got tips on what to say to have the most impact.

We spent about $300 making Tuesday happen.

Can you help us cover our expenses?

Our community driven campaign is a labor of love, and every dollar you can spare is a dollar we can spend turning out public comment during these final two weeks. Thanks to all of you who have given already, and thanks to those of you who have given your time, energy and support. Tuesday’s event was possible because of people like yourself, and we’re hoping to pull a few more tricks from our sleeve in these final few weeks. Donations are tax deductible!
Thanks.