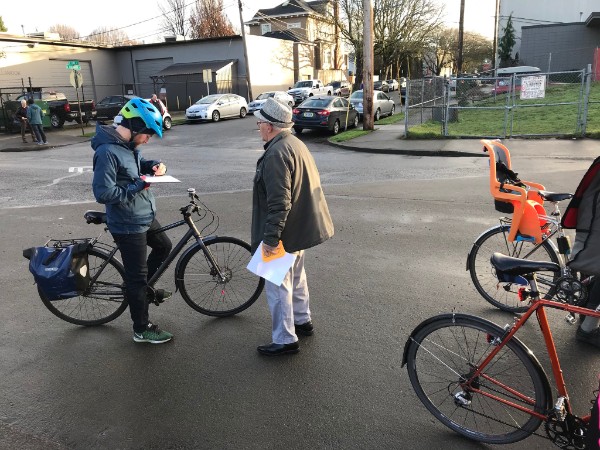 Save the Flint Avenue Bridge Rally A Success

Last Tuesday, our coalition handed out coffee and donuts on the N Flint Avenue Bridge. The bridge is slated for removal as part of ODOT’s $450 million, 1.8 mile freeway expansion in Northeast Portland, and we spoke to hundreds of neighbors walking and biking about our concerns for the project. Thanks to our pals BikeLoudPDX for joining us on a sunny morning!

Nearly 300 comments on our #NotAnImprovement Letter 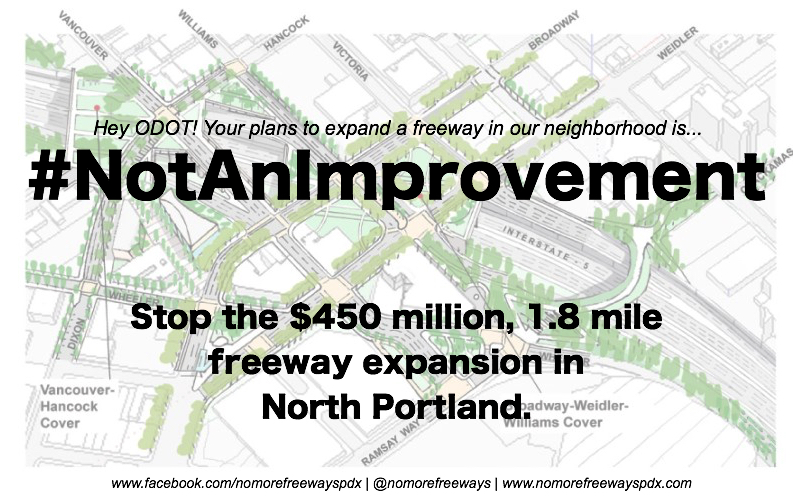 After hearing from ODOT, Mayor Wheeler and the Portland City Council about their tentative support for the freeway because they believed it was an Improvement to the Neighborhood, we asked you to join us by signing our letter explaining all of the reasons this freeway expansion was #NotAnImprovement to the local neighborhood.

Our 31-page letter includes 293 signatures and hundreds of comments from Portlanders who walk, bike, drive, and take transit through the Rose Quarter and emphatically agree with the hundreds of community members who believe this project is a boondoggle that harms the local neighborhood. This letter (along with letters from the Eliot Neighborhood Association and LUT Committee) was submitted as testimony for the 2035 Central City Plan.

If you didn’t sign our letter but still wish to tell the Bureau of Planning and Sustainability and Portland City Hall that this plan is #NotAnImprovement to our community, the Central City Plan is still taking comments up until noon today, Monday January 22. 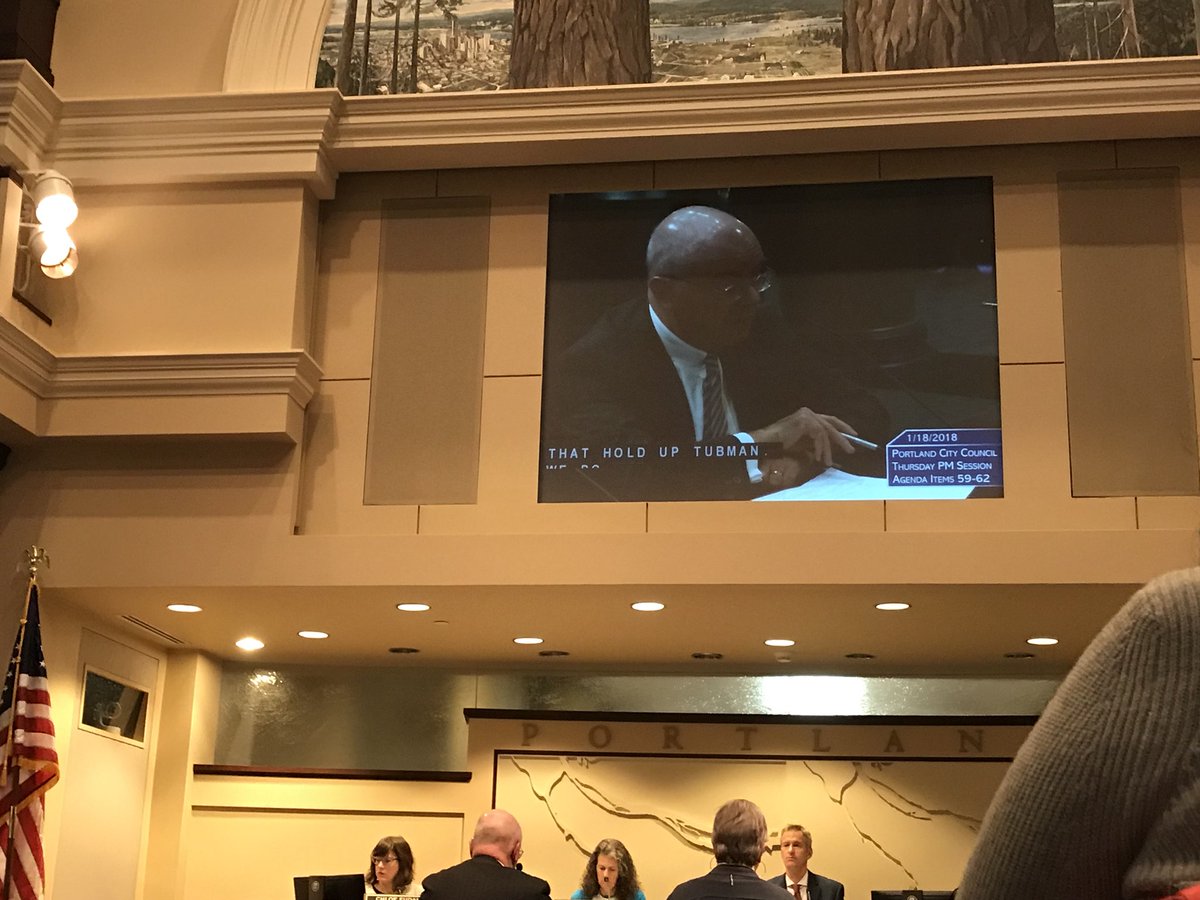 Over a dozen people testified at the Central City Plan Hearing last Thursday in opposition to the freeway. The “freeway fightin’ hero of the day” award belongs to Portland Public School Board Member Paul Anthony, who spoke with strong condemnation about the impact this $450 million freeway expansion would have on the ability for PPS to reopen Harriet Tubman Middle School:

“To open Tubman this August we must immediately invest $12 million in health, safety and infrastructure improvements. In my view, ODOT and the city of Portland are putting PPS and it’s board in a nearly impossible situation. The district and its board is risking the education of 1000s of Portland’s children, the hopes and dreams of my own personal community, and spending $12 million of public money all on a resource this project is putting in grave risk.” 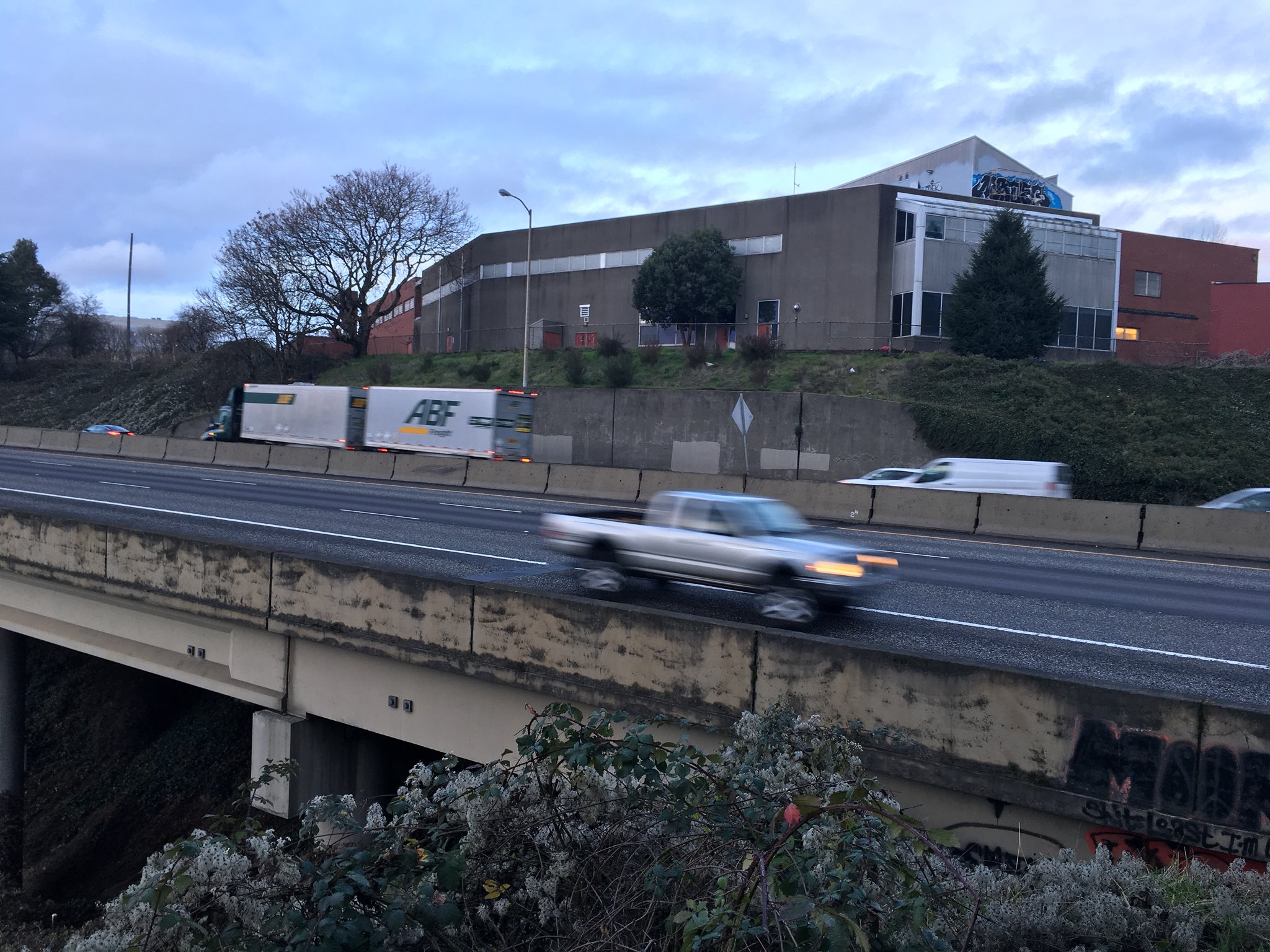 Read Paul’s full testimony at BikePortland.org, and check out the article about the importance of Anthony’s testimony in Portland Mercury. Harriet Tubman is a historic institution with particular significance to Portland’s original North Portland African-American community.

Are you a future Harriet Tubman parent, or member of the PTAs of Sabin, Boise/Eliot, Irvington or King schools and concerned about the impact the freeway expansion will have on your new middle school? Get in touch.

ODOT’s Congestion Pricing Open House
At the behest of HB 2017, the transportation bill that passed Salem last summer, ODOT is exploring the institution of congestion pricing on I-5 and I-205. Our letter submitted last November documenting the importance of congestion pricing to developing equitable, cost-effective, sustainable solutions to traffic gridlock is available here. Our coalition believes that congestion pricing should be implemented on any interstate within the Urban Growth Boundary before *any* freeway expansion is studied, and that revenue raised from congestion pricing should be directed towards investments in transit, biking, walking, and existing freeway maintenance, in accordance with the recommendations proposed by environmental justice advocates on ODOT’s Value Pricing Committee.
ODOT is hosting three open houses on Congestion Pricing:
Tuesday, 1/23/18, Clackamas Town Center Community Room, 4:30pm
Saturday, 1/27/18, Lloyd Center Mall, 10:00am
Tuesday, 1/30/18, Vancouver Community Library, 4:30pm
More information on these open houses is available on ODOT’s website; you can also submit your comments online on ODOT’s internet open house, available here.
Harriet Tubman Middle School
We’re looking to build more connection to local businesses affected by the removal of the N Flint Avenue bridge and to parents and community members concerned with the air quality around Harriet Tubman Middle School. Please reach out to us if you’d like to learn more about our campaign, or can connect us to local advocates, parents, or others who wish to learn more about the freeway expansion’s impact on Tubman Middle School 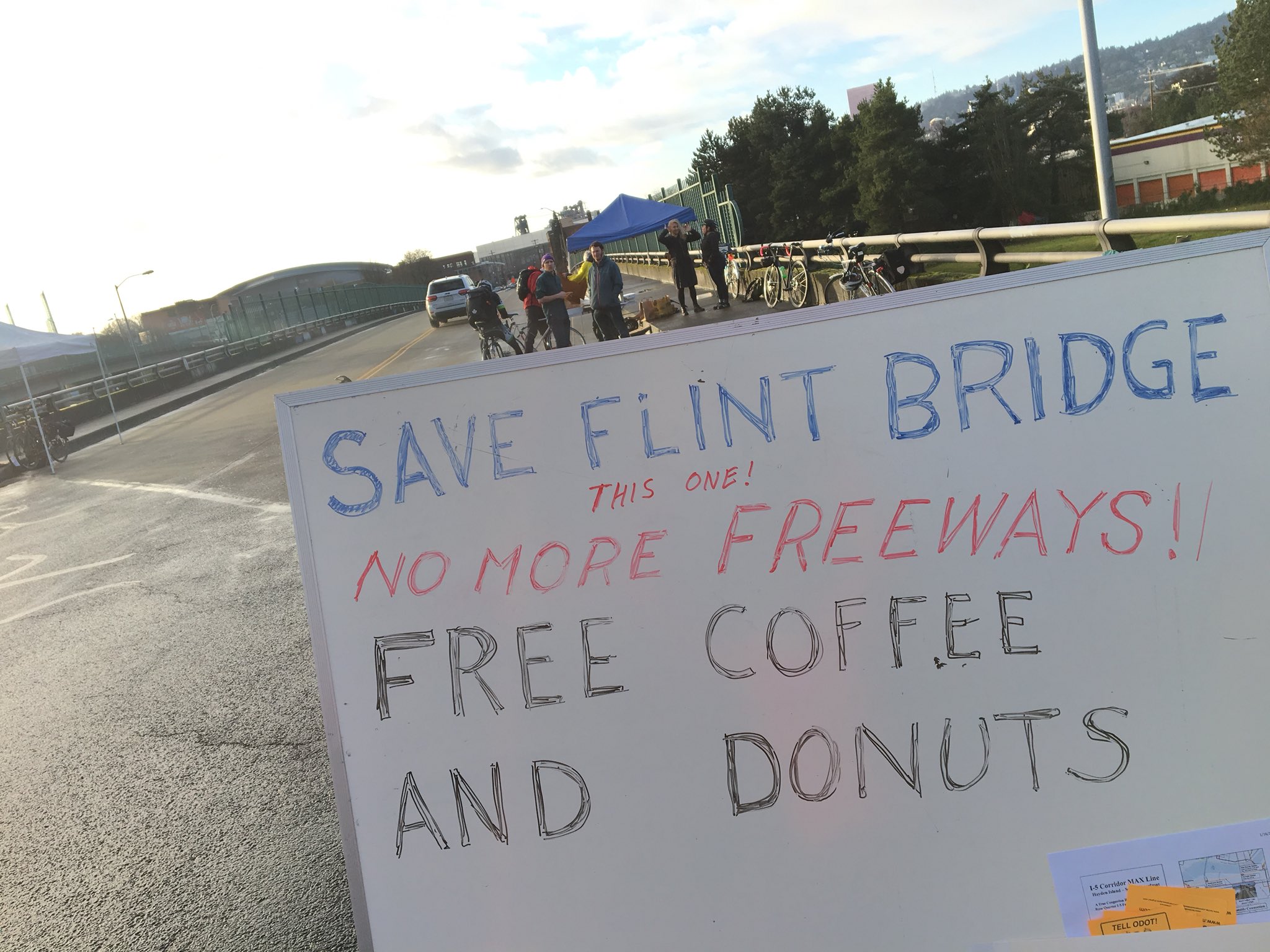 Throw us a couple bucks?
This entire enterprise, which has collected over 1,000 written comments in opposition to this freeway, captured public attention from every major newspaper in the region, has been run by volunteer community members with a bolder vision for transportation justice. A single donation of $100 last week helped fund our entire donuts-and-coffee rally last week, which led to thousands of Portlanders learning about our campaign on local media and collected over 90 signatures for our cause on a single day. We’ve spent less than $1400 over the last six months to call out our leaders about this $450,000,000 boondoggle. That’s a pretty cost-effective investment in the future of our city. Do you have some cash you can throw our way to help us keep up the fight? Plus, we have cool buttons.

Thanks for your continued support! Let’s go stop a freeway!