Skip to content
Happy New Year, Freeway Fighters! Here’s what you might have missed in the last month over the holiday.

Governor Brown asks for delay on OTC vote on RQ 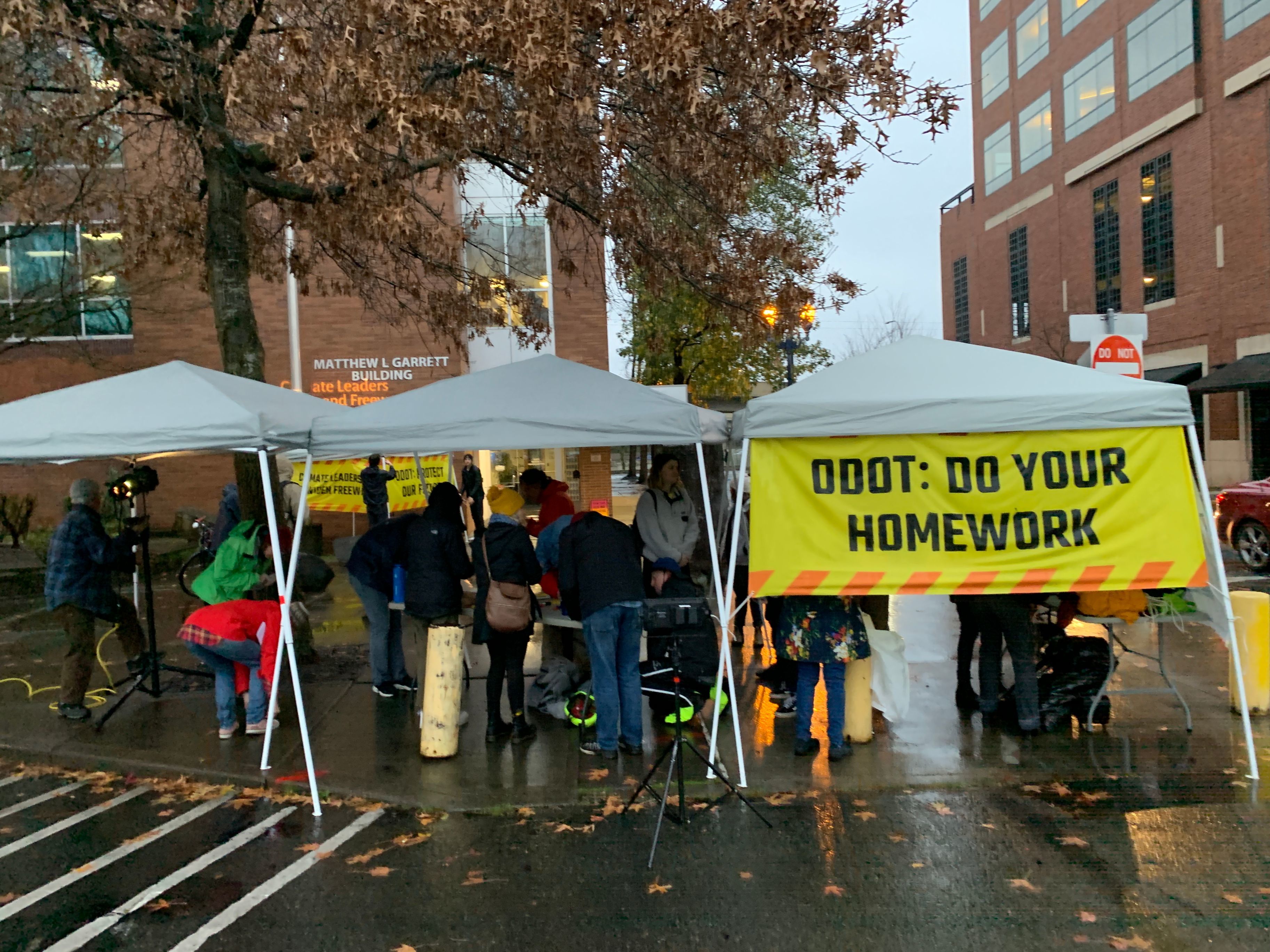 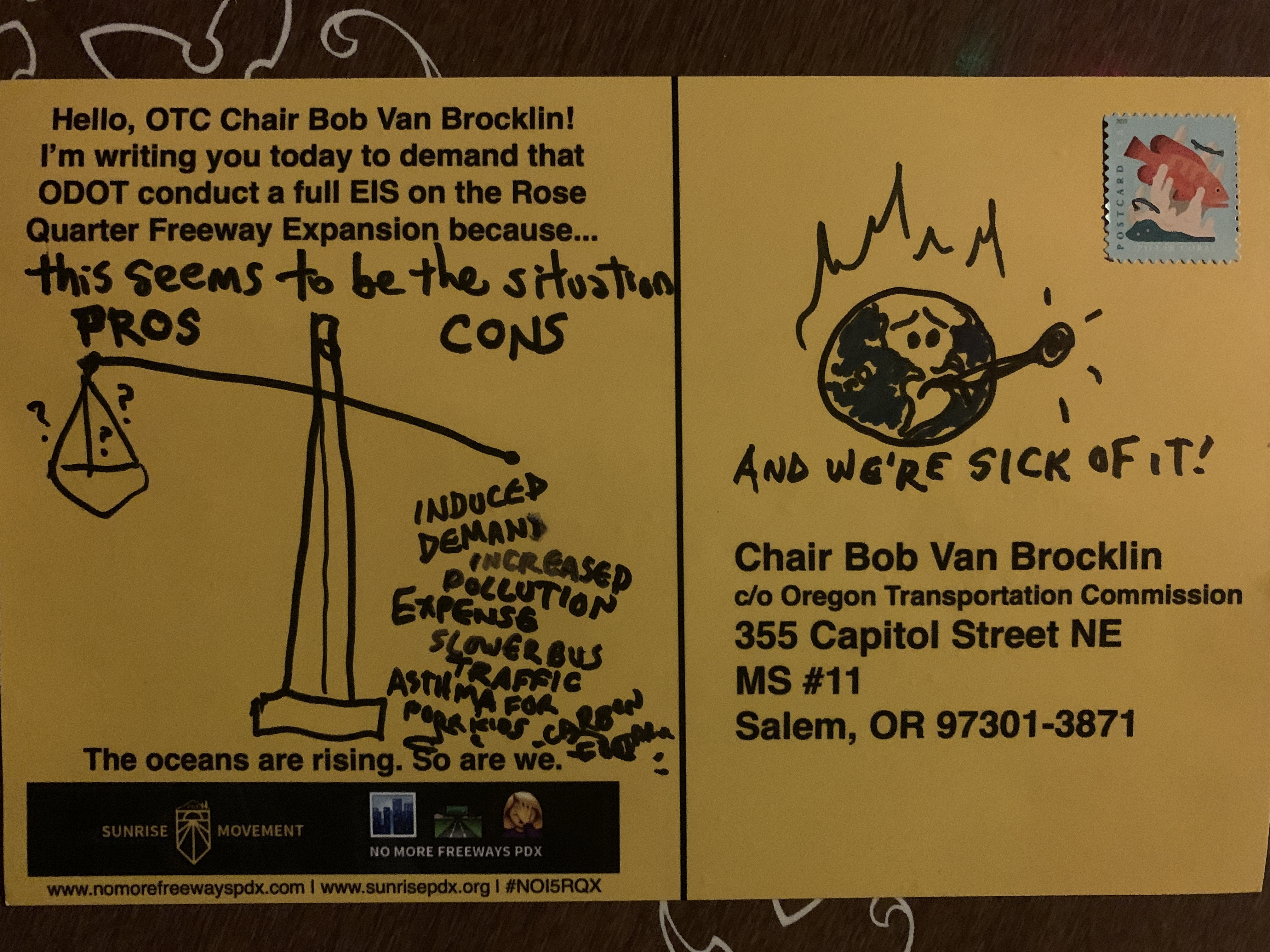 Governor Brown letter: The day before the big Oregon Transportation Commission (OTC) hearing in which they were scheduled to vote to move forward with the Environmental Assessment, Governor Kate Brown asked for the OTC to delay their vote on the Rose Quarter Freeway Expansion.
We are grateful that Governor Brown reaffirmed it’s impossible (despite ODOT’s continued intentions) to simply build our way out of traffic congestion, air pollution or carbon emissions. Her encouragement of further study and implementation of congestion pricing is commendable, and we are also pleased Governor Brown acknowledges the need for ODOT to collaborate with ongoing community-led initiatives for justice in the restoration of the neighborhood.
In light of the Governor’s letter, No More Freeways continues to demand that ODOT conduct a rigorous Environmental Impact Statement that could clarify whether ODOT is telling the truth in their claims that the Rose Quarter Freeway Expansion would somehow be the first in America that reduced traffic congestion, lowered carbon emissions or improved air pollution. Our independent analysis of ODOT’s traffic projections revealed numerous, easily-challenged assumptions and discrepancies with significant implications to the project’s public health and climate considerations. The public deserves nothing short of full accountability, transparency and honest assessment of these impacts for a proposed half billion dollar investment in fossil-fuel infrastructure on the dawn of our hastily arriving climate emergency.
You can read our full response to Governor Brown’s letter here. 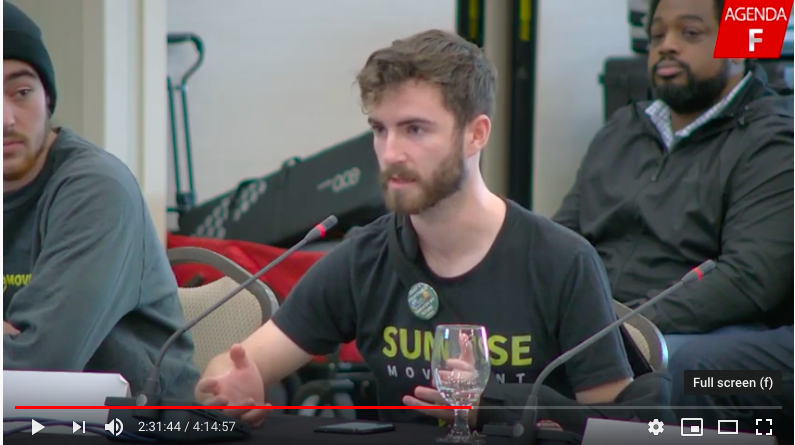 No More Freeways, Sunrise PDX roadtrips to Lebanon:   Despite the fact that the Oregon Transportation Commission had planned to hold their vote on the Rose Quarter Freeway Expansion over 100 miles away from the location of the project, and gave the public only one week No More Freeways and youth climate leaders at Sunrise PDX roadtripped down to Lebanon, Oregon to testify at the OTC hearing. It’s deeply unfortunate that ODOT has tried to pit our climate-minded, sensible transportation advocacy against folks who wish to see workforce development and support for minority contracting. We are fundamentally in support of initiatives to put the community to work and provide economic opportunities to build green infrastructure that will tackle congestion, reduce carbon emissions and improve air pollution. We’re eager to continue to champion alternatives to freeway expansion, which historically have comparably small job benefits per dollar of investment, especially in comparison to investments in transit, biking and walking. 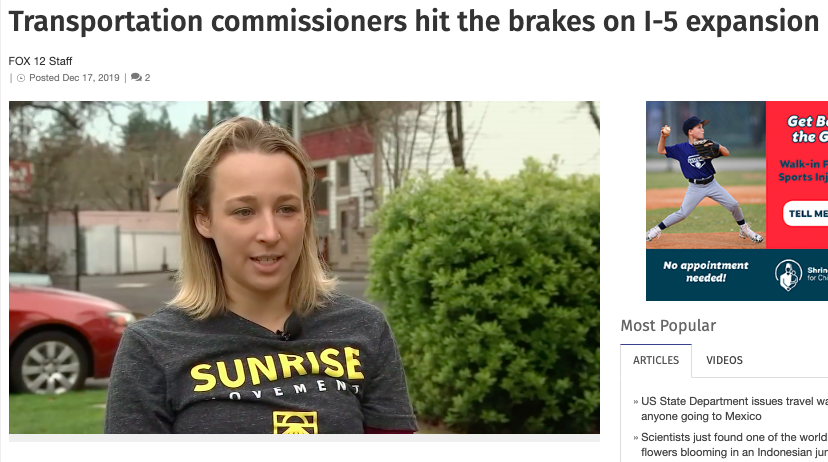 Thanks to BikePortland.org for the detailed, nuanced coverage of last month’s meeting (and thanks to FOX 12 for covering the Sunrise PDX climate advocates who have been with us all year in opposition to this project). And thanks to the Portland Mercury, for getting this quote from Brian Davis, NMF’s expert Traffic Engineer:
“At the end of the day, the [environmental assessment] was a half-assed effort that was quite obviously prepared to reach a pre-ordained conclusion,” Davis said. “Our region has not taken a serious and sober look at this project. We are firing blind here. We have no idea what this freeway expansion will do to traffic volumes on the freeway, to the air quality near it, to the lungs of the schoolchildren alongside it.”
What’s next: We look forward to the Oregon Transportation Commission announcing when they intend to vote on whether the I-5 Rose Quarter Freeway Expansion; we expect it to be sometime in the next three months. We sincerely hope that the OTC agrees that the vote about whether or not to move forward with the Environmental Assessment will be held in the City of Portland, that they will give adequate public notification, that the event will be accessible the community, and that you all join us to turn out and make your voice heard. Stay tuned! 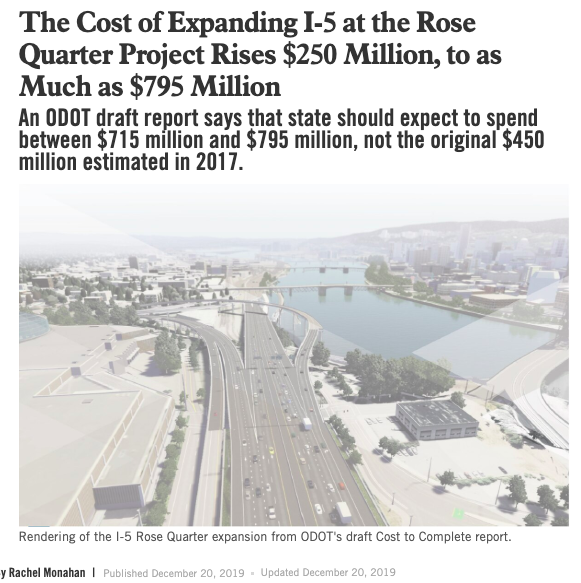 Willamette Week got their hands on ODOT’s “cost to complete” report, and it contained a doozy: to absolutely no ones surprise, costs on the Rose Quarter Freeway Expansion continue to dramatically rise. WW was nice enough to quote us about our concerns for the project:
“The Cost to Complete report suggests that ODOT continues to deceive the public in every pertinent detail about this disastrous, polluting megaproject,” says Aaron Brown, organizer of No More Freeways, a group opposed to the project. “The project’s cost have increased 66 percent in approximately three years, and this increase doesn’t addressing the expensive but necessary recommended changes Portland Public Schools and Albina Vision have requested to ensure ODOT’s proposals contributes to initiatives for a healthy, functional neighborhood, city and region.”
In a followup interview, Willamette Week asked ODOT’s staffers if there was a cost at which this project would no longer be feasible, or a cost at which the agency would stop pursuing the project. The agency said no. The newspaper also asked ODOT about our claims that induced demand would mean the freeway expansion would be full of traffic as soon as it reopened (a claim backed by ODOT’s own consultants). Their response?
“It’s important to hear those voices, and we’ve certainly heard that about induced demand, but our system isn’t quite there yet. The need is there to ensure that we keep Portland moving”
We are as puzzled as you are by “our system isn’t quite there yet” means.

ADVOCACY ALERT: NEED YOU TO TURN OUT FOR HEARINGS FOR T2020 AND FOR PORTLAND’S RESIDENTIAL INFILL PROJECT 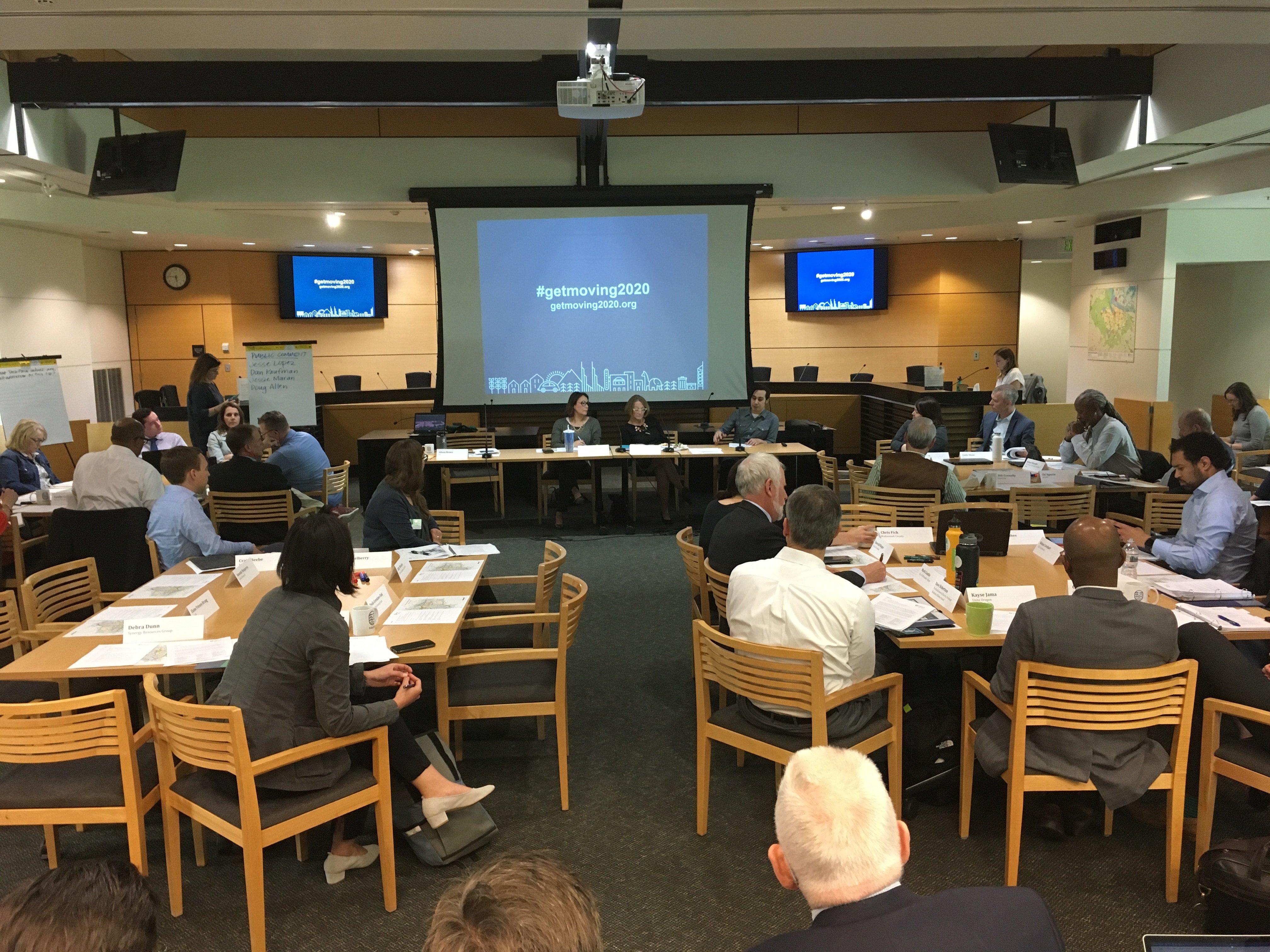 There are two big advocacy opportunities coming up in the next couple days that close allies of the No More Freeway campaign have been tracking for years. If you’ve got time and an inclination to show up for some housing, transportation and climate justice in the next week, please consider writing to your elected officials or showing up to testify: 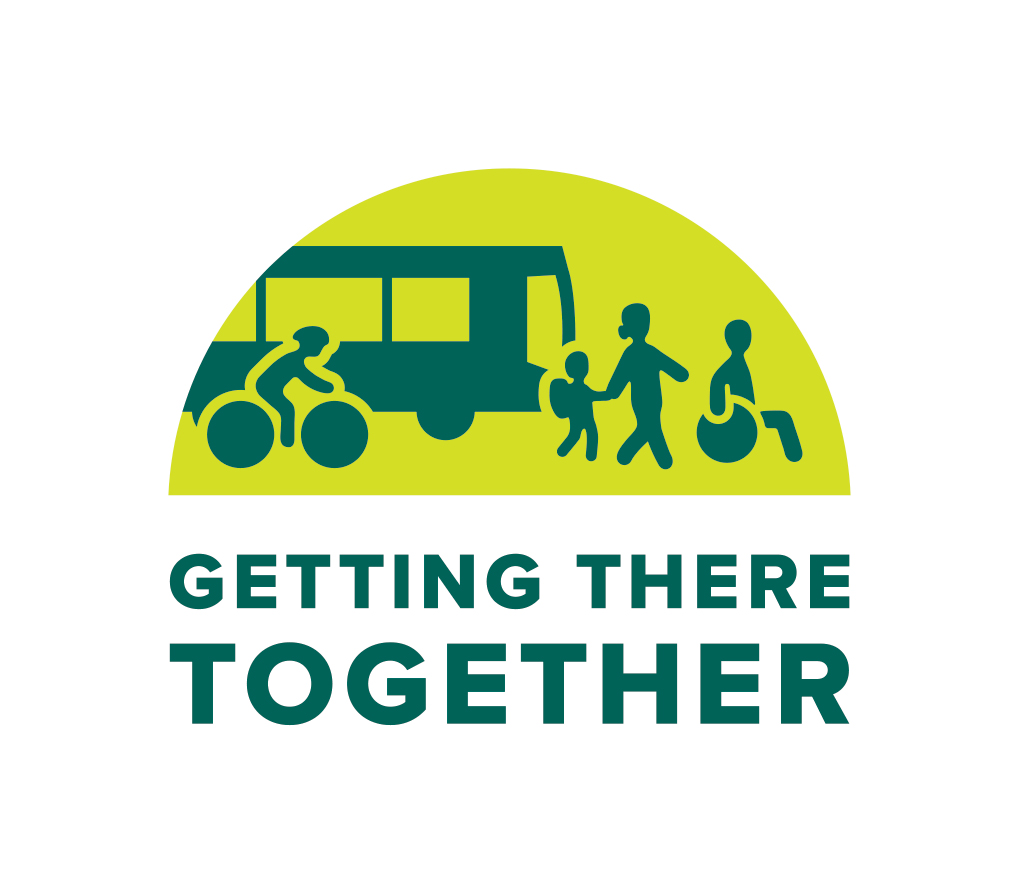 METRO HEARING NEXT MONDAY, JAN 13: Getting There Together and a litany of other community partners we trust are asking folks to turn out for the big T2020 hearing at Metro Council this next MONDAY, January 13. We need folks to show up and testify in support of transit, biking and walking options and to oppose the road expansions proposed in this package that will be referred to voters for the November ballot. The facebook event is here. 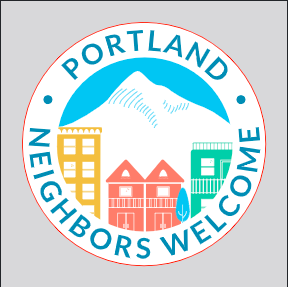 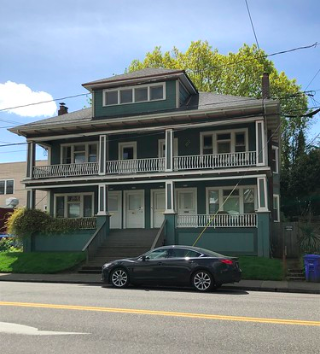 We need to match them. Join Sunrise PDX, No More Freeways, Portlanders for Parking Reform and Portland: Neighbors Welcome for a testimony prep happy hour on January 10th at NW Lucky Lab. We’ll present an overview of the latest Residential Infill draft, and share our recommendations to strengthen it – including a proposal to create more regulated affordable homes. For those who are new to giving testimony, we’ll share all the tips and tricks.

Start 2020 off right and join the fight for a liveable climate, more equitable housing, and common-sense parking reform through the re-legalization of fourplexes. If you’ve been looking for an opportunity to get involved and missed us in 2019, now is the perfect time to hop on board.

Do let us know if you have any accessibility needs, or would like free child care available on site, and we will make sure to accommodate! Remember to wear blue! 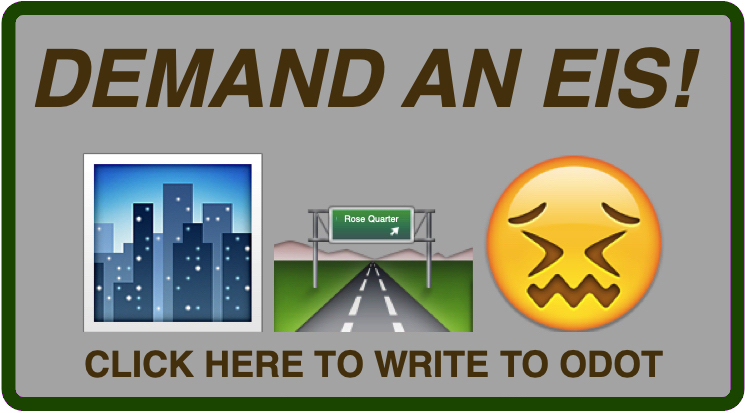 After sending in hundreds of postcards (and 300+ emails) to the Oregon Transportation Commission and roadtripping down to Lebanon last month, we’re in a bit of a holding period. We are eagerly awaiting the Oregon Transportation Commission’s update on when they plan to vote on the Rose Quarter Freeway Expansion – we certainly hope that they will hold the meeting in Portland, and give us a few weeks notice to ensure that the community has the proper time to engage with their vote.

If you haven’t already sent in a letter demanding a full Environmental Impact Statement, it’s not too late – we encourage you to reach out to the OTC (and go ahead and email your message to your local state representative and senator, too).  Email them and demand that the OTC listen to the hundreds of community members and advocates asking for a full Environmental Impact Statement.

Passin’ the hat around for No More Freeways – got a few bucks to keep us strong in 2020? 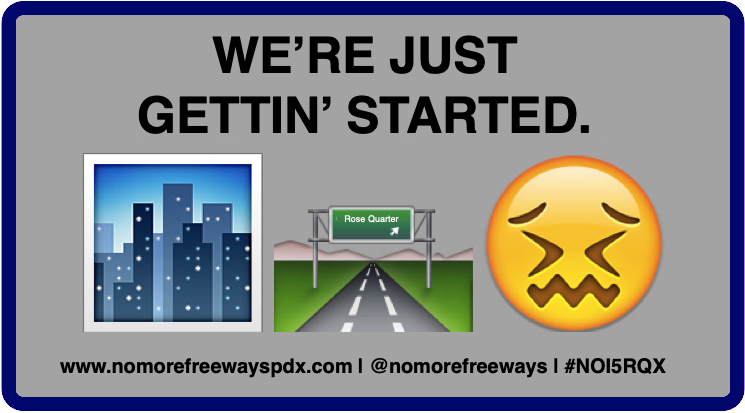 It’s been a busy year for No More Freeways. Here’s a brief list of our accomplishments:

✅ Helped community submit 2000+ comments on the public record this spring, 90% in opposition to the project
✅ thoroughly debunked ODOT’s traffic projections 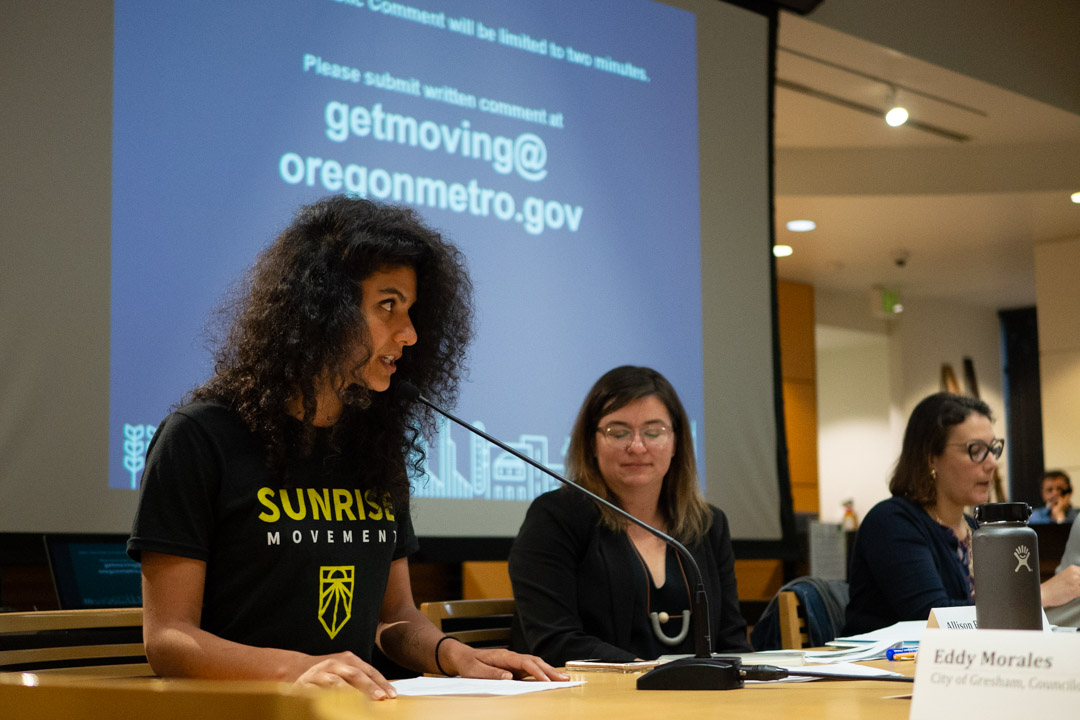 ✅ partnered with Sunrise Movement PDX to testify at numerous Metro T2020 task force hearings
✅ Took over ODOT’s public hearing in March with overwhelming testimony in opposition to the project
✅ Brought Tubman MS students to testify at JPACT and kill ODOT’s sneaky CBOS program
✅ Got five legislators (including Speaker Tina Kotek!), the whole PPS board, Mayor Wheeler, and other local elected officials to ask ODOT for a full Environmental Impact Statement (shoutout to Rep Power for being the first!) 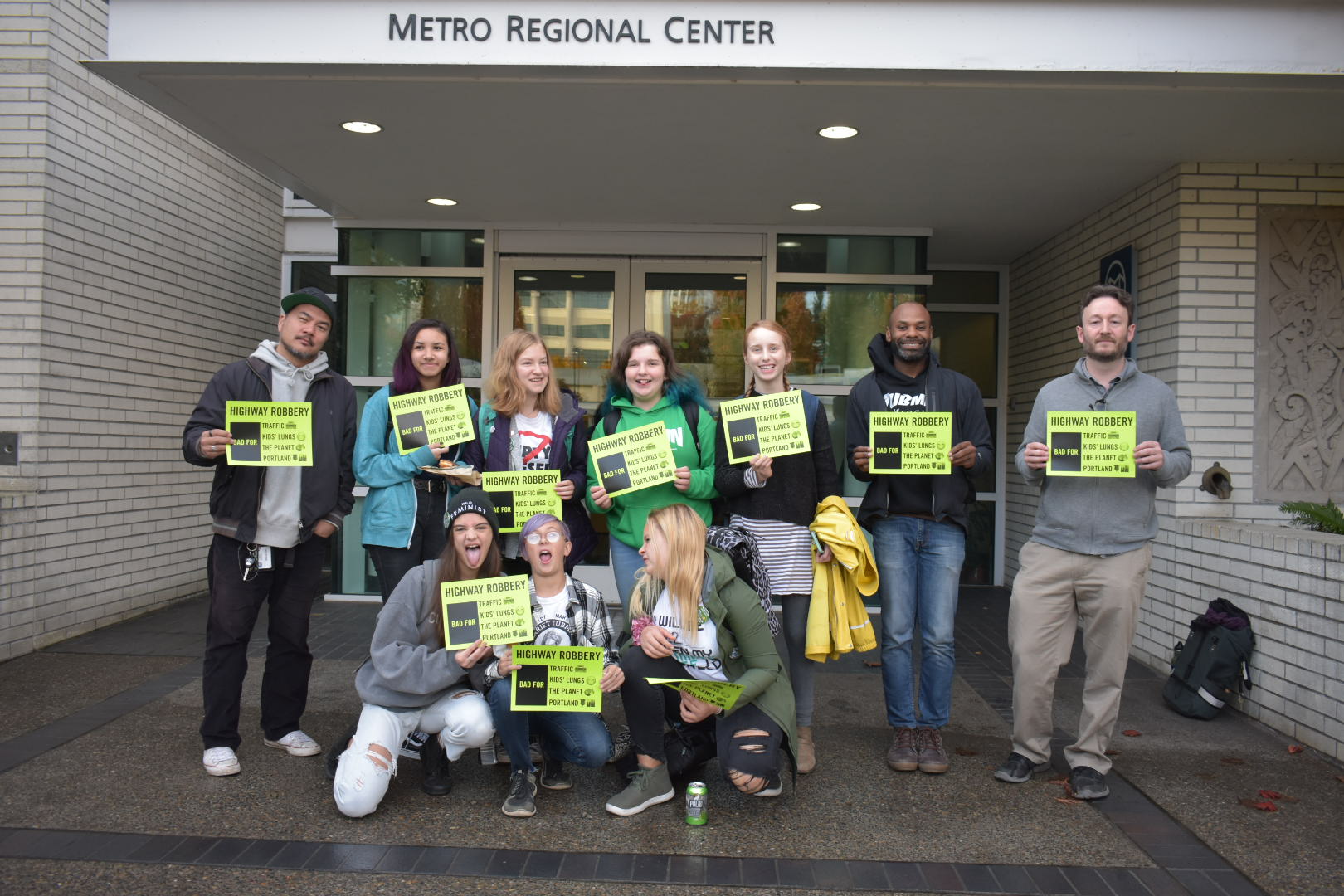 ✅ went viral on twitter a few times for heckling our ostensible climate-minded elected officials who weren’t sticking up for our cause (you know who they were)
✅ Engaged the wonderful students, teachers, and parents at Harriet Tubman Middle School, and radicalized the PPS Board to fight this damn freeway in the process

✅ Testified at the Oregon Transportation Commission twice, including once with Sunrise climate youth in Lebanon, and mailed them a letter regarding the need to hire a climate smart director (they didn’t listen to us) 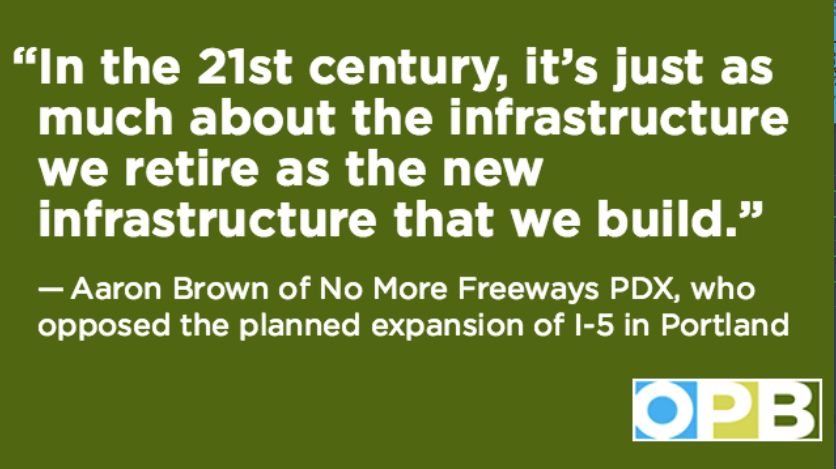 ✅ Earned press in Slate.com, Streetsblog USA, got an interview on OPB’s Think Out Loud, all sorts of rabblerousing with Willamette Week, The Oregonian and Portland Mercury, and was on local television more times than we care to count 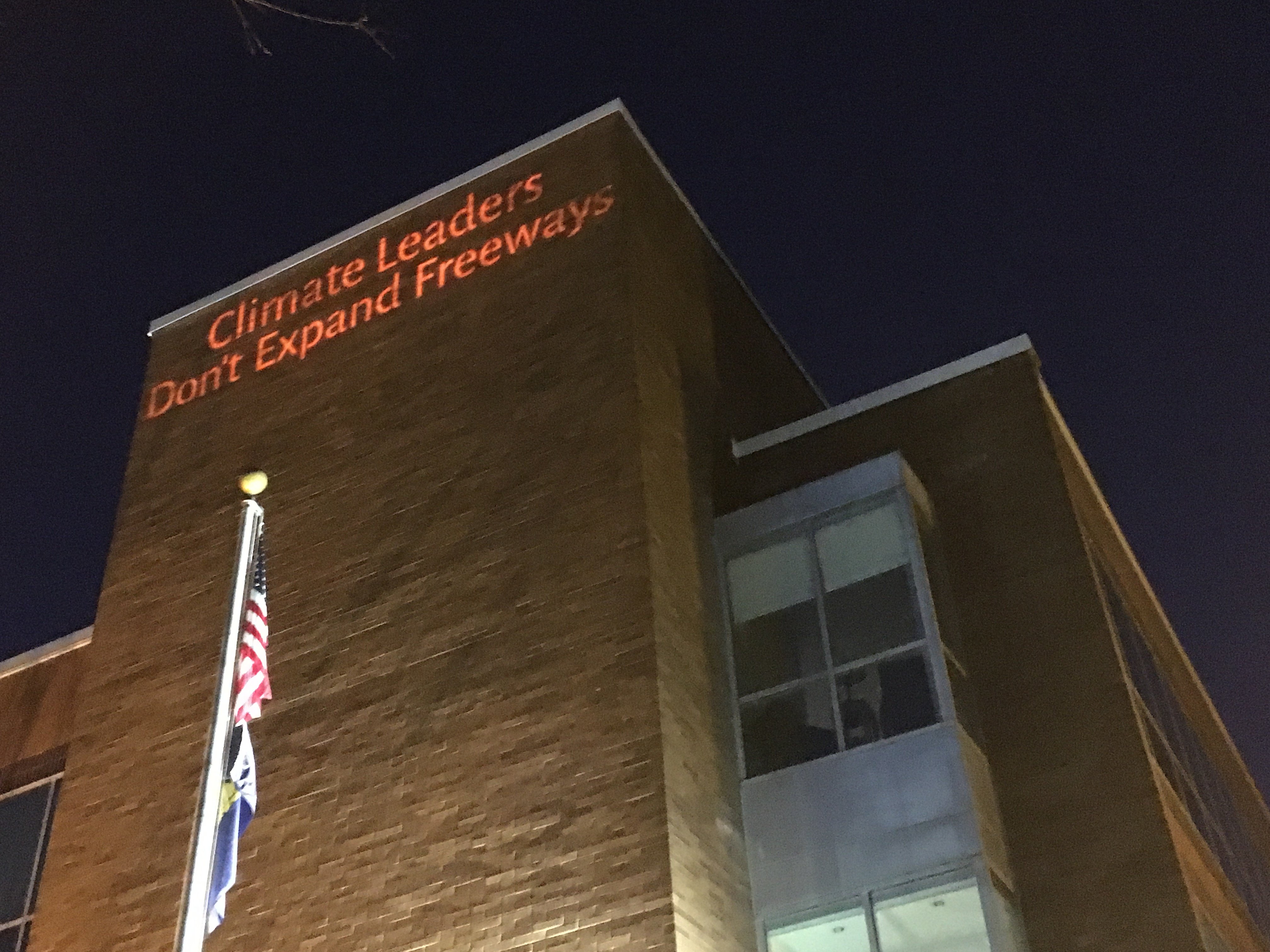 ✅ shined a big “Climate Leaders Don’t Widen Freeways” light up against ODOT’s downtown building
✅ Helped solicit testimony for numerous bills in the legislature this summer including stronger diesel regulations, drivers cards, missing middle housing
✅ showed up for OPAL Environmental Justice Oregon‘s #UpWithRiders campaign
✅ Tabled at the Youth Climate Strike in September with 350PDX
✅ hosted our friends at a fancy table at Oregon Walks‘ Westons this year!
✅ co-hosted a memorable, moving rally in the rain outside of ODOT’s headquarters this December
✅ and even got Governor Kate Brown to weigh in on our project and ask for the OTC to delay their vote. 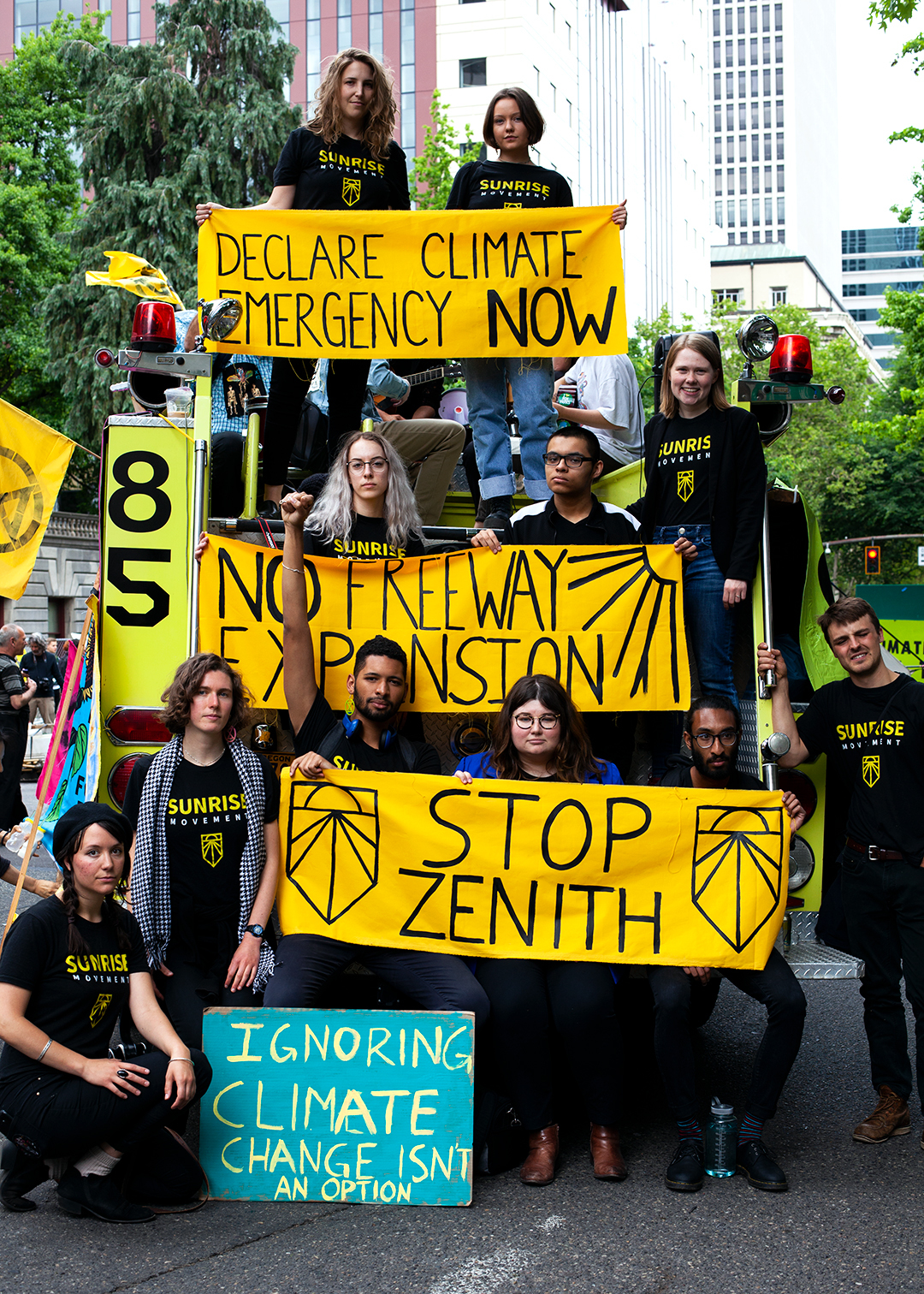 We couldn’t have done all of this without you – we’re an all-volunteer group of Portlanders hustling in our spare time to fight the freeway industrial complex. We’re gonna need your help in 2020 – any chance you can throw us $20 (or whatever you can afford) to help us cover our costs as we continue to rabblerouse in the new year? We’ll mail you some of our nifty buttons and stickers!

Thanks and gratitude for your ongoing support. We’ve got a decade left to fundamentally decarbonize our society, and we can’t do it without you. join us today, and help us make sure every elected official in the entire state of Oregon hears us when we say: