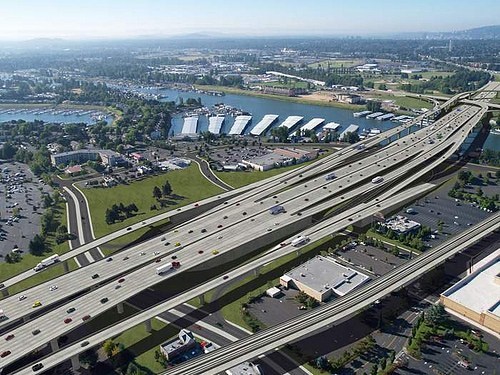 This Wednesday, Oregon Public Broadcasting’s Jeff Mapes broke the news that we at No More Freeways had suspected for the past few weeks as we analyzed ODOT’s traffic data: ODOT is deliberately putting their thumbs on the scale of their traffic projections to justify the Rose Quarter Freeway Expansion.

By baking in the assumption of the construction and completion of a $3,000,000,000, 12-lane Columbia River Crossing project (a proposal that’s been more or less dead for nearly five years), ODOT’s traffic modeling deliberately floods the Rose Quarter area with a much higher rate of traffic, which creates a significant amount of congestion in the RQ area (that then this freeway is supposed to “fix.”)

Why does that matter? We’re glad you asked. We’ll paraphrase City Observatory‘s excellent run down, which we encourage you to read in full:

✅ It’s a violation of the NEPA process to hide such a fundamental assumption
✅ The Environmental Assessment ODOT provided doesn’t study a true “No-Build Scenario” against which project effects can be judged
✅The inclusion of a new, nonexistant, currently-not-even-seriously-considered CRC inflates traffic levels to make the Rose Quarter project seem more necessary
✅The modeling suggests that the need for ODOT’s Rose Quarter Freeway Expansion is largely caused by the CRC – aka, the Rose Quarter project is needed mainly to solve the problem that a new 12 lane CRC creates
✅Hiding CRC in no-build violates requirements that EA addresses cumulative impacts

and the biggest one:

c’mon, ODOT models traffic for a 12-lane bridge that’s barely on the drawing board, but can’t model for congestion pricing, which is moving full steam ahead, and likely would negate the need for the project? 🤔 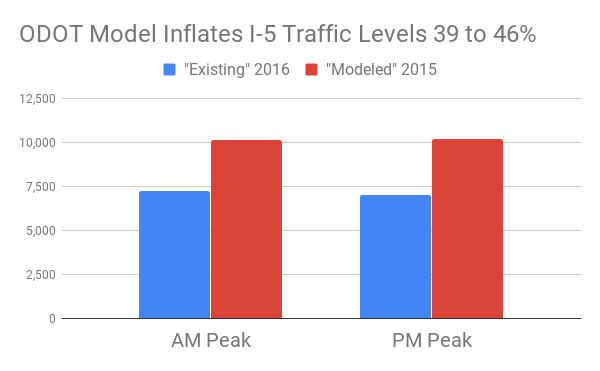 It seems wild to us that ODOT is deliberately *not* studying whether congestion pricing, a policy tool that the Oregon Legislature asked ODOT to explore for the Portland region as part of HB 2017 (it passed with bipartisan support!). ODOT recently asked the federal government to move forward with further study and implementation of congestion pricing along this stretch of freeway. Yet despite the fact ODOT is modeling traffic projections from now until 2045 on I-5, *and* the fact that congestion pricing is substantially impactful on traffic patterns and congestion…ODOT isn’t studying it as relevant to projecting out traffic on this freeway over the next two decades? But they *are* absolutely certain that a new CRC is coming to sic a firehose of traffic on the Rose Quarter?

THESE ASSUMPTIONS BAKED INTO ODOT’S TRAFFIC MODELING (AND ODOT’S UNWILLINGNESS TO STUDY OR CONSIDER ALTERNATIVES) ARE OBSCURING THE IMPACT THIS PROJECT WILL HAVE ON THE COMMUNITY, AND THEY ARE DOING IT TO JUSTIFY THE $500 MILLION EXPANSION PROJECT.

Again, we encourage you to check out the full City Observatory post, which runs down the numerous technical assumptions included in ODOT’s models. All of the assumptions are largely designed to churn out numbers that suggest that this freeway expansion will somehow be the first of its kind to improve local air pollution, reduce carbon emissions, and reduce traffic congestion. By using these overly generous assumptions, ODOT is trying to make it sound reasonable to justify expanding lanes of freeway into the backyard of Harriet Tubman Middle School when 40% of our carbon emissions come from transportation and we only have 11 years to fight off the worst impacts of climate change.

Did you know that the Rose Quarter Freeway Expansion includes widening a freeway to hover over the Vera Katz Eastbank Esplanade? We didn’t either! A community member asked ODOT for engineering drawings of the project on February 16 and were told they didn’t exist; when we filed a Freedom Of Information Act, we were then told there were 36 GB of files available, but that we only got less than a week to pour through these schematics. Thanks to Cupola Media for drawing up what the Eastbank Esplanade will look like with ODOT’s freeway widening – definitely seems like it’ll be much louder and a lot less pleasant a place to ride a bike. (You can follow our pal Iain’s full twitter thread about his FOIA adventures with ODOT here) 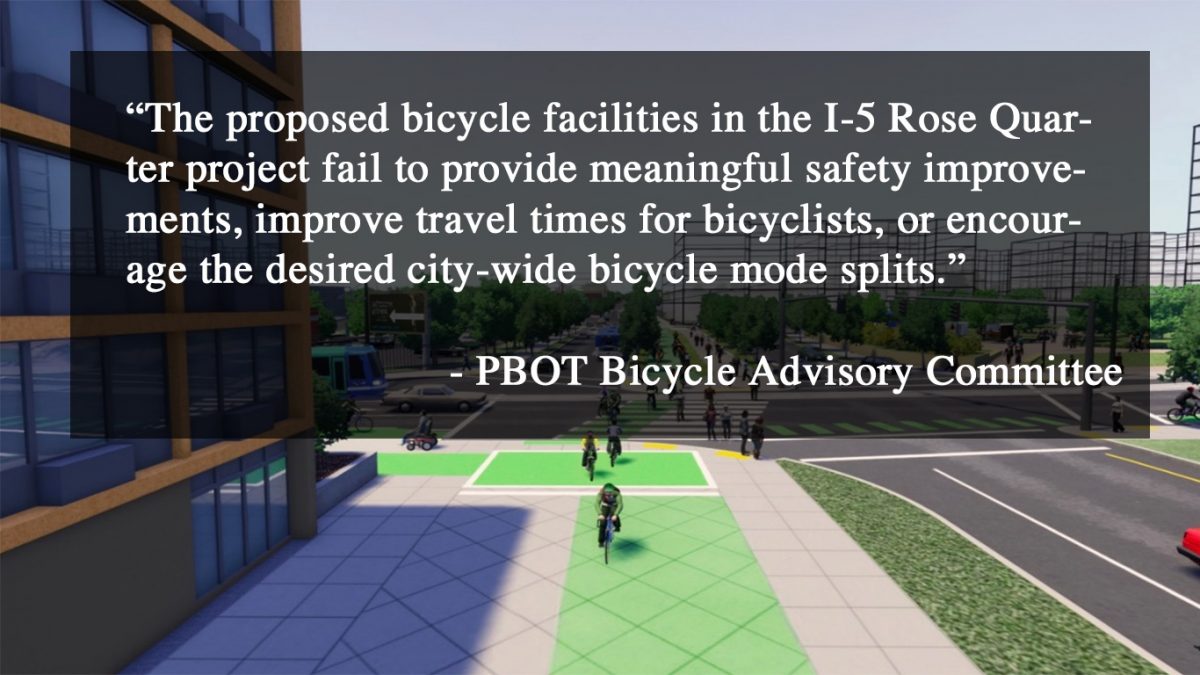 The Portland Mercury’s Blair Stenvick also has a thorough roundup about our efforts, chronicling the large number of organizations that are submitting public comment requesting that ODOT move forward with an Environmental Impact Statement. 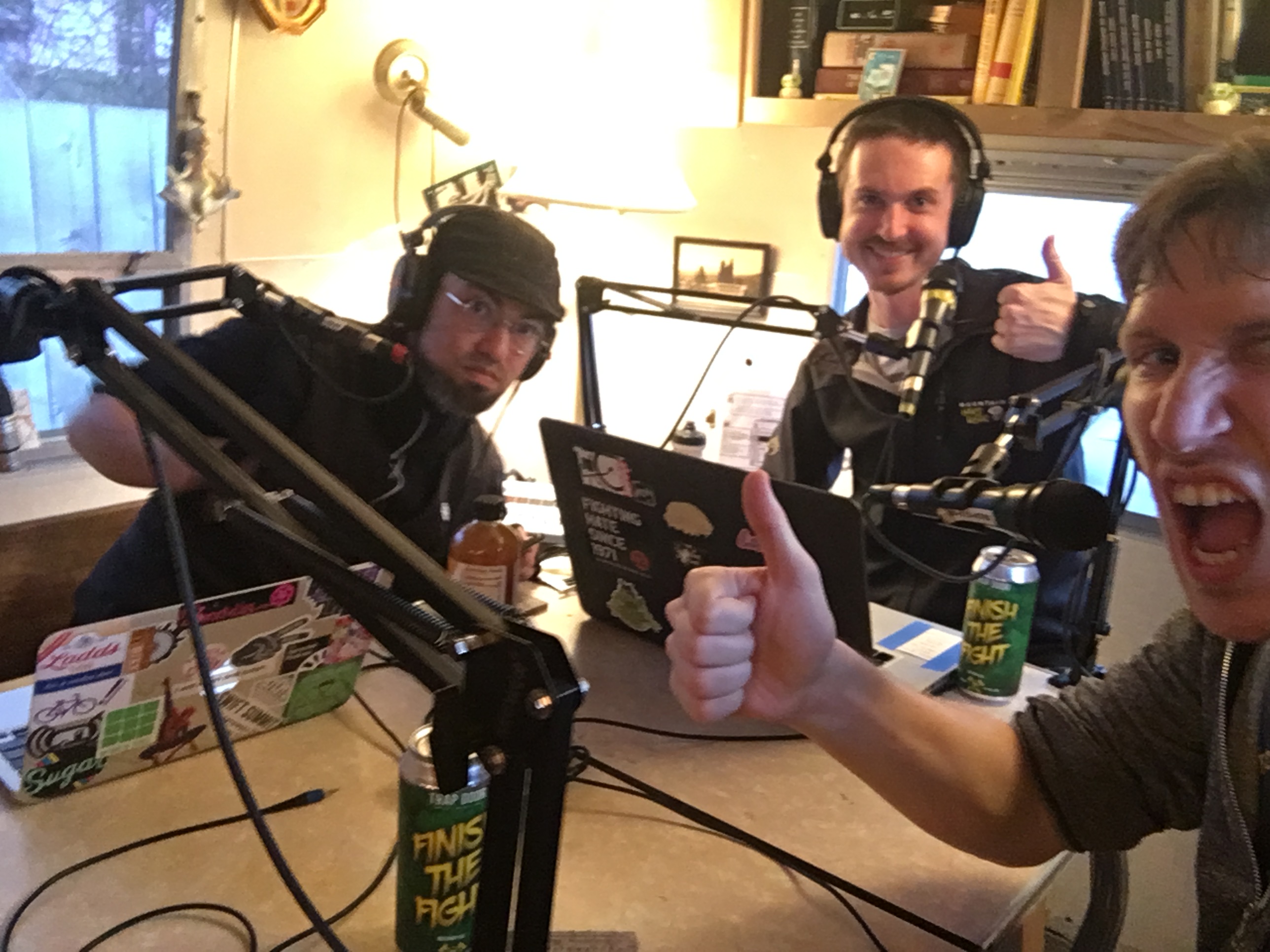 We were on the Sprocket Podcast yesterday – it should be ready to download around 8pm Friday. Download the episode to hear us talk about how driving cars is like the movie Avatar, how we’ve organized our campaign over the past couple years, and why the freeway industrial complex is so big and powerful. Thanks for hosting us! We were also on KBOO’s Heather McCoy show three times in the last month. 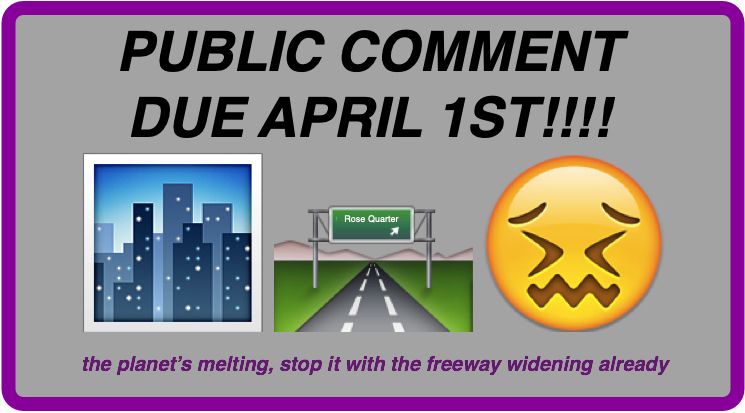 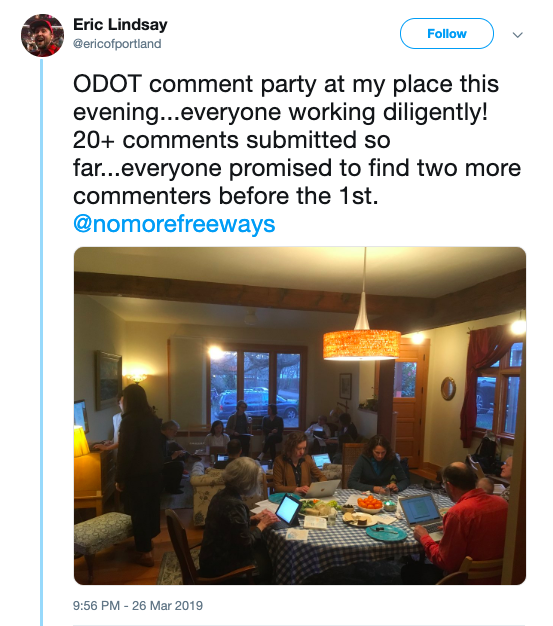 ook, we know this is the second long-winded email we’ve sent you in a week. But hey, this deadline on Monday is important. There’s no path to stopping this freeway that doesn’t entail us kicking butt and getting hundreds and hundreds of comments on the record in opposition to this project. We promise to chill out, give your inbox a break and go dormant for a few weeks after the deadline passes, but for the time being: all hands on deck! Every bit of elbow grease you can put in to submitting a public comment and reminding your friends, family, coworkers, twitter crushes, neighbors, teachers, whoever you talk to on any sort of daily basis – GET THEM ON THE RECORD.  And big ups to our pal Eric, who hosted a comment writing party this week and got dozens of letters submitted.

If you’ve already submitted public comment, thank you! Can you post this on social media (our hashtag is #NOI5RQX), bug your roommate or spouse or friends to check us out, or forward our email? Word of mouth and community-to-community organizing is more effective than any paid ads we can provide.

We’ll send one more small reminder Monday (the day the EA closes!), and we’ll probably send a big sweeping follow up thank you the following week, and then leave you alone for a while. Pinky swear. But we need your help, so please, go submit public comment.